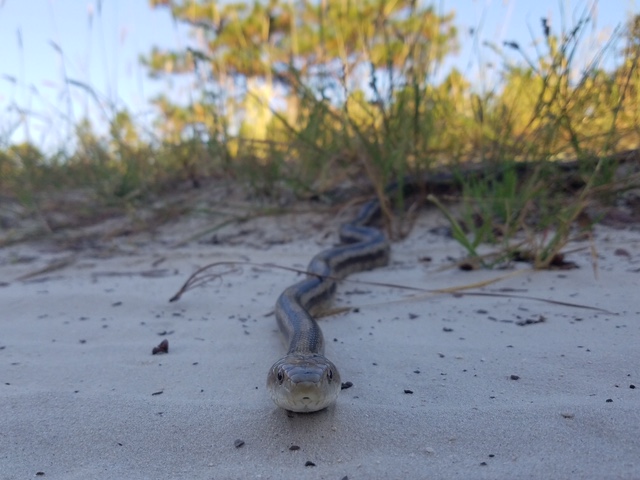 Patricia is the manager of ABPRI. Her primary focus is research on gopher tortoises, their commensals, and their habitat. She specializes in writing management plans and educational curriculum. Additionally, Pat works on plant surveys, habitat monitoring, and habitat management. She also designs risk management, initial suitability assessments, and business plans for preserves.

Patricia has been actively involved in investigating the natural world since 1967, when she worked at Tropical Atlantic Biological Labs on Key Biscayne and explored the Everglades mapping rare plants. She worked on projects throughout Central and South America and the Caribbean as well as in Australia, New Zealand, the Bahamas, Barbados, Spain, China, Western Canada and the eastern United States. Following the death of her husband Ray, she has continued to work in education, field research, and writing.

Chase Pirtle has been obsessed with the natural world for as long as he can remember. He began his animal career at a young age volunteering at the Moonridge Animal Park in Big Bear California. Since then, Chase worked at a wolf sanctuary, completed a two-year animal science program in New Jersey, attended a forestry and wildlife ecology program in South Carolina, and graduated from the Santa Fe College Teaching Zoo in Florida.

In addition to working in the zoo world, Chase has his Florida FWC venomous license and his authorized gopher tortoise agent permit. He is now the Animal Care Specialist and Habitat Manager at ABPRI.

Edi was born and raised in Namibia, where she grew up on a 4,000 acre farm. There, she was able to interact with and raise a variety of livestock and wildlife. She worked as a veterinary assistant for several years at a clinic that specialized in large animals and wildlife. She relocated to the United States to pursue a career in equestrian sports. Since retiring from competition, she has directed her focus back to conservation. She raises awareness through photography, videography, and social media.

Lauren Griffin has been the Communication Manager of ABPRI since 2015. She received her PhD in environmental sociology and media from the University of Florida and currently works in UF’s Office of Research. Originally from Indiana, she loves working on conservation projects in her adopted home state of Florida, and is particularly fond of wading birds and hognose snakes.

The ABRPI Board of Directors is made up of officers who understand the history and goals of this non-profit corporation. These professionals knew Ray E. Ashton and his intent and desires for the organization and for Ashton Biological Preserve. They currently serve to work with and support Patricia Sawyer Ashton and the rest of the Ashton community in the continuation of the ABPRI Mission.

Ashton Biological Preserve is a working conservation facility. While we love visitors, please note that we are not open to the public without a reservation. Thank you!